In the last three months I’ve been to three writing retreats. The first was Lit Camp a small four-day deal in Calistoga, California. Then I was a teaching assistant at UCR’s ten-day residency in Palm Desert where I workshopped with other alumni. And finally I just got home from the Squaw Valley writer’s retreat.

I’ve put 1,109 miles on my car, have sat in over 50 lectures, have read 21 workshop submissions and have critiqued about 330 pages of other people’s work.

Needless to say I am so ready to get back to ACTUALLY FUCKING WRITING.

Seriously. If I have to sit through on more panel on “the future of the publishing industry” I think I might spontaneously combust. 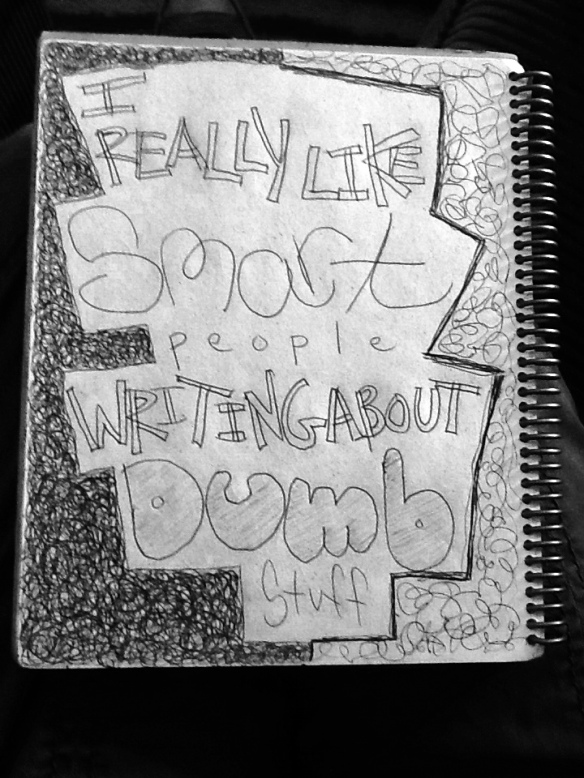 I’m planning to write an essay for Lit Central about all this but in the meantime I have an entire notebook filled with bits of information–yes, I’m that dorky girl who takes out a pen and writes down the book you mentioned while you’re talking at a party.

What follows is just a random list of some of the things I wrote down and some doodles from the margins. 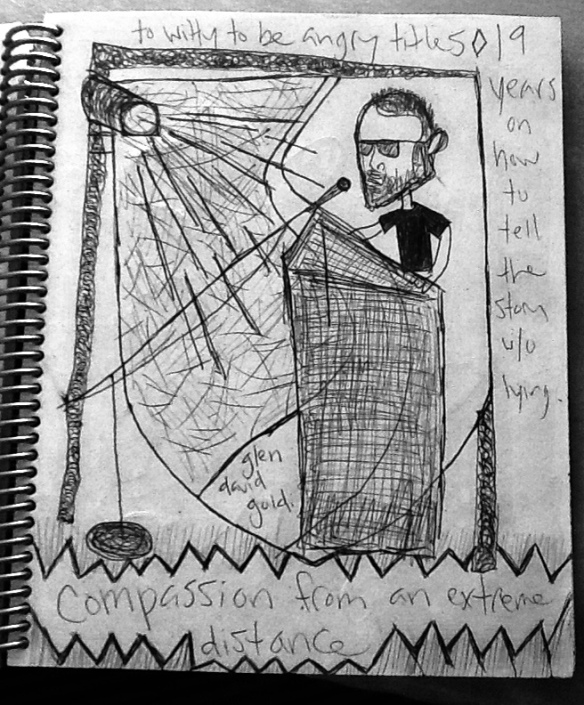 “Workshopping should be for rough pieces, if not then that’s like cleaning up for the maid.” -Al Young 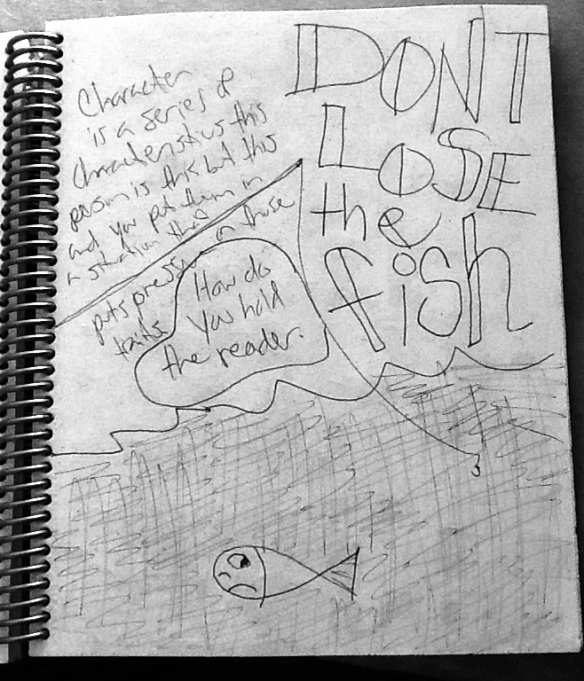 “Writing is about building ramps to moments that matter. Then when the reader is in mid-air you slow down.” –Steve Almond

“You don’t get three adjectives you get two. It’s like accessorizing, you don’t want people to look at you and think “wow you’re wearing a lot of stuff” you want to look good.” –Susan Straight

“I don’t want to take 15% from a poet.” –Mollie Glick (in response to the question of whether poets have agents) 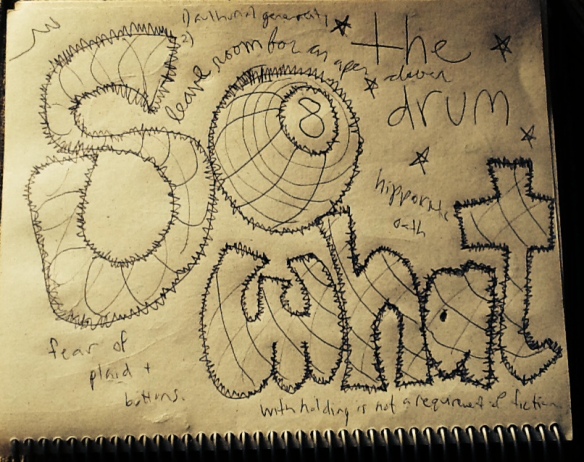 Story Collections: Last Night At The Lobster by Stewart O’Nan, Spectacle by Susan Steinberg, Stay Up With Me by Tom Barbash, Twenty Grand: And Other Tales of Love and Money by Rebecca Curtis, Binocular Vision by Edith Pearlman, The Last Chicken In America by Ellen Litman, The Collected Stories of Deborah Eisenberg, Like Love But Not Exactly by Francois Camoin, The News From Spain by Joan Wickersham, Nimrod Flipout by Etgar Keret, The Commuters by Cheryl Klein, Wearing Dad’s Head by Barry

Novels: Telex From Cuba by Rachel Kushner, Duplex by Kathryn Davis, Gardening at Night by Diane Awerbuck, Tinkers Paul Harding, The Butcher Boy by Patrick McCabe, Shards by Ismet Prcic, Henderson The Rain King by Saul Bellow, The Sense of an Ending by Julian Barnes, Confessions of a Teenage Jesus Jerk by Tony DuShane 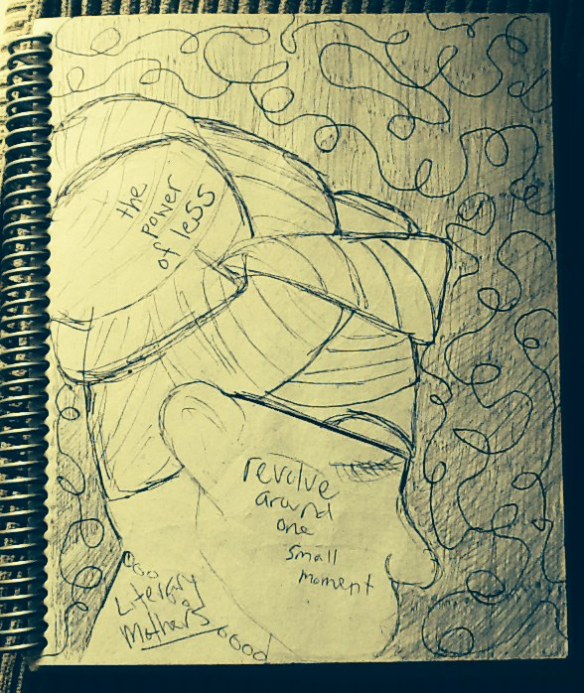 Nonfiction (essays & books on writing): Rose Metal Press: Field Guide To Writing Flash Fiction, The Lonely Voice: A Study of the Short Story by Frank O’Connor, On Swarm by Tom Scocca, The Empathy Exams by Leslie Jamison, Metawritings: Toward a Theory of Nonfiction by Jill Talbot.

Amy Tan was working as a business writer the first time she attended the Squaw Valley Writers Conference. It was 1985 and she was thirty-three years old. The Joy Luck Club was published in 1989. File Under: Things That Make Me Feel Better.

Here are two of her rejection letters that were on display at the conference. There was a poster board filled with them. 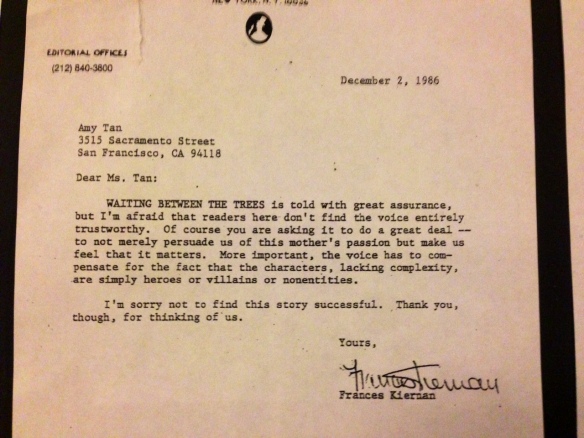 “the voice has to compensate for the fact that the characters, lacking complexity, are simply heroes or villains or nonentities…” 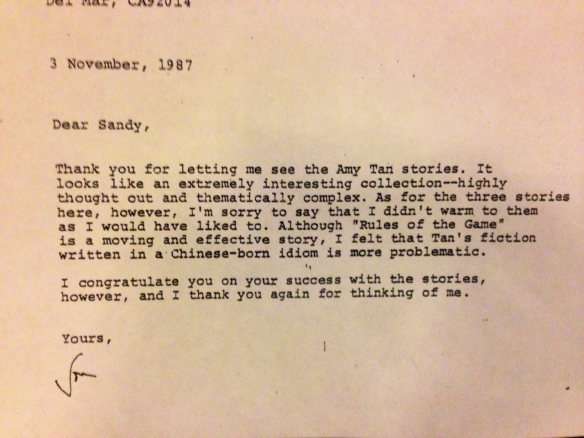 -Edan Lepucki attended Squaw for the first time in 2007 and it wasn’t until this year, seven years later, that her debut novel “California” came out. File under: Patience Is A Virtue.

-Micheal Jaime-Beccerra says he tries to write 500 words a day and that he’s lucky if he’s kept all 2,500 words by the end of the week. File under: How To Eat An Elephant.

-The first draft is for yourself. The other drafts are you adjusting the story for an audience. (paraphrasing Glen David Gold) 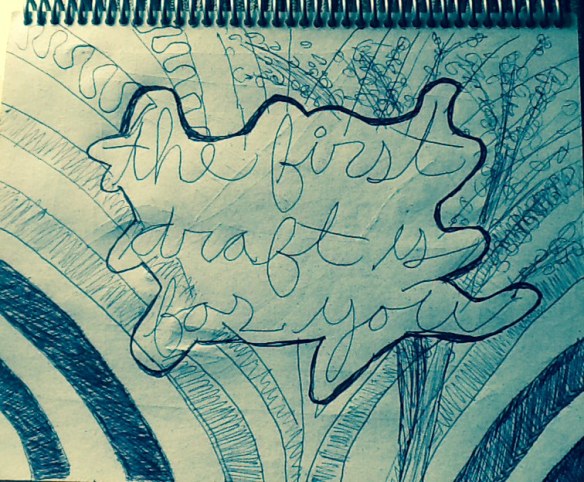 -The first story in a collection is a statement piece.

-You should know how much money is in your character’s pocket.

-The fear of plaid and fear of buttons are actual phobias. 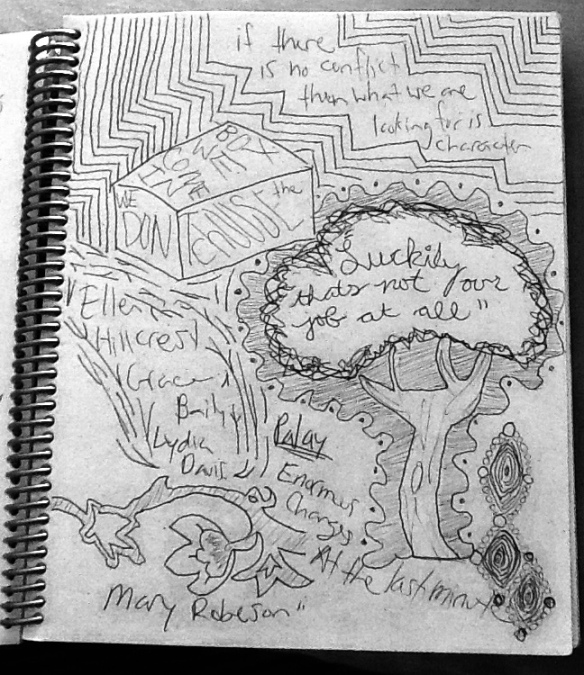