I am on my knees scrubbing black residue off of jacuzzi tiles at condo complex on Pacific Coast Highway. My hair is pulled back in a bun and I can feel the sun beating down upon my neck. I forgot sunscreen.

I’m scrubbing the tile because this month there’s been record heat in Orange County and relentless Santa Ana winds. Record heat means more swimmers and the wild winds mean there’s more debris in each pool, which can double the time it takes for my father’s employees to finish their daily routes. Being strapped on time, our guys have to prioritize. This means skipping the tile brushing and that’s where I come in.

This necessary neglect, combined with the influx of bathers, results in a thick black residue that builds up on the tiles along the spa’s waterline. It is a stubborn film made of human sweat and oils, as well as sunscreen and tanning lotion and the only way to get rid of it is with elbow grease. Lots of elbow grease. 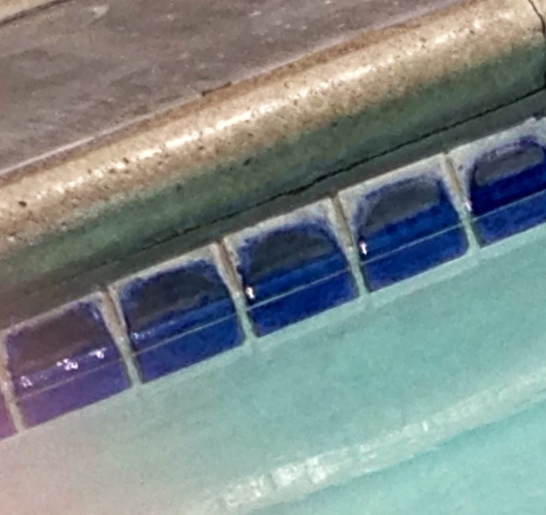 Before pic. It doesn’t look like much but it’s really stuck on there I swear!

Over the weekend I went to a writing retreat and the whole time I felt like an outsider. About 80% of the group was middle to upper-middle class white women in their 40’s. They were all very polite, most of them were blonde and pretty and seemed like they were enjoying a much needed break from their hectic lives, lives that I can only assume were filled with children and husbands and careers.

Feeling like I had little in common with these women, I ended up spending most of the four days hanging out with an old writer guy named Mike. Mike is a retired bricklayer/stone mason with the same leathery brown skin and friendly bullshit-detector as my father and every other blue-collar guy I know. He also had a great laugh.

At the retreat the hot tub was a big deal. There was lots of drinking and hot tubbing but I never went in. I tried to be social anyway and spent most nights watching the hot tub crowd from the comfort of a patio chair set near the edge of Jacuzzi. The bright moon and yellow spa light were the only sources of light so I was sort of in the shadows of the pool deck talking to Mike about writing and the perils of working for your old man.

I was asked this several times.

I shook my head and scrunched my nose and shrugged. “I just don’t like it.”

But in my head I was thinking: Ugh, because it’s fucking gross! 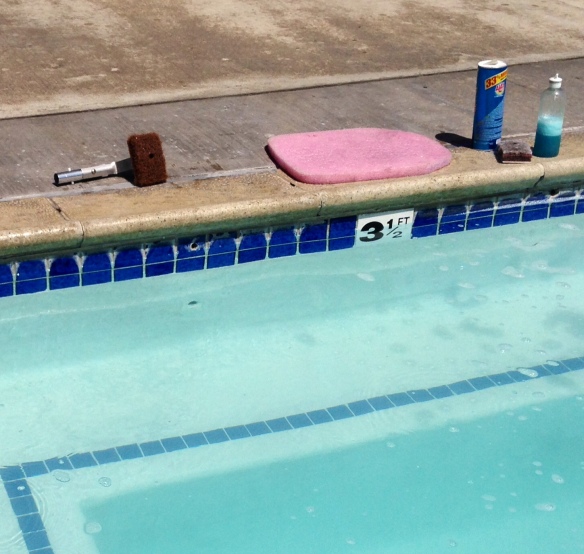 After! (The calcium deposits need bead blasting that’s not my job)

That was Saturday night and now here I am Monday morning on my knees in front of another hot tub (this one’s unfortunately twice as large) scrubbing off stains.

I’m back to working for my dad to save up for yet another writing retreat, the next one is the Squaw Valley Writers Workshop. I’m working on an essay for Lit Central that gets into whether all this stuff seems worth it or not. I do sort of feel like a sucker doing this shit when I just buried myself in debt from the whole MFA thing. We’ll see how it goes.

This week I reviewed Jim Gavin’s short story collection Middle Men for The Coachella Review. It’s a book that is mostly about working class guys living in southern California, guys whose lives haven’t quite met their expectations, who are usually trying for something more but often come up short.

It was really refreshing to read because there were a lot of similar themes that I’ve been trying to wrap my head around since working for my father again. I’ve been working on this sort of jovial flash piece called “A Day In The Life Of Your Pool Man,” as a way into some of these concepts.

Here’s the part I wrote that gets at some of the stuff I identified with in Middle Men:

“Though you may never suspect it, there are times when your pool man contemplates the inconsequential nature of his life. How he’s spent day after day, year after year, picking debris out of water knowing full-well that the wind will blow and undo an hours worth of work in a matter of seconds. He wonders if this is the way life was meant to be lived or whether he should have wanted something more. Other times he feels comforted by the same simplicity.”

It’s probably bad luck to post a piece of a story that isn’t finished yet but there you have it.

I think growing up in a working class family has always made me feel inferior to people that have more professional jobs. People who have to wear nice clothes to work, who sit in meetings and cubicles all day sending memos and shit.

Neither of my parents went to college and it seems like my father and most of his peers wanted something more for their kids. They wanted us to go to college and get jobs that would require us to use our minds–jobs that would keep our hands from becoming as torn up, coarse and weathered as theirs were.

They associated office jobs as the first step toward moving up in the world. Expected us to full take advantage of opportunities they’d missed. So my brother and I did end up getting degrees (the first on both sides of the family) but we both kept working with our dad anyway. So much for that idea… (though I know he secretly loves it).

I guess this whole class thing is just something small that has made me feel a little bit different than a lot of writers I’ve encountered lately. Something that makes me seek out Mike the bricklayer instead of the ladies in the jeweled sandals and maxi dresses.

There were actually some of those same types of women by the pool while I was scrubbing that tile. When I finished, I ran the jets to make sure the jacuzzi’s foam wouldn’t overflow (without defoamer that stuff will bubble over like that car in Willy Wonka).

That’s when one of the ladies addressed me in a friendly voice:

“You should’ve brought your suit girl!”

I smiled and tried to think of something equally friendly to say but I just nodded and stared at them behind my giant sunglasses. It was so hot all I could think about was how relaxed they looked laying there all slathered in tanning oil. And conversely how ugly and gross I must have looked sweating in my stained Pool Perfection t-shirt.

I could already see the nice even tans they had going. Then I touched the back of my neck, which was already starting to burn. I couldn’t see it of course, but I knew it was already bright red — burnt by the same sun that had kissed their skin so beautifully.

And I thought: I can’t wait for June Gloom.